What can you expect of a land where the government prioritizes the happiness of its people above anything else? Sheer contentment that rubs off onto the handful of travellers in their 30' and 40's who are curious enough to make their foray into this Himalayan nation. Fiercely protective of its culture, the country wears its heritage easily and without any fuss, accepting it as a matter of course rather than something that needs to be displayed; and this is exactly what draws one immediately to it. Yet, despite the traditions that rule everyday life, Bhutan isn’t some ancient nation trapped in a forgotten century. It has kept abreast of the 21st century, sifting through the trappings of modernity, discarding the irrelevant, retaining only the essentials and managing to tick along like an analog clock with a digital interface as well. With its many Dzongs, museums, handicrafts, pristine landscape and food that’s as varied as the tartan patterns of its peoples dresses, Bhutan charms its visitors with its mystery and magic.

Best time to visit: October to December is the ideal time to visit Bhutan as the air is clear and fresh with sunny skies. January and February are colder, but from then until April the climate remains dry and pleasant and in late spring the famous rhododendrons bloom spectacularly, flooding the valleys with colour.

Weather and Average temperature: Thimphu, located in a valley, at an altitude varying between the average temperature ranges from 5 °C (41 °F) in January to 20 °C (68 °F) in the period from June to August. 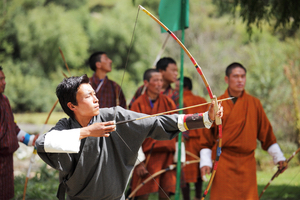 Try and ace the legendary William Tell as you join a teacher who’ll give you pointers on the national sport and how to split an apple with a bow and arrow; preferably one that’s not sitting on someone’s head. 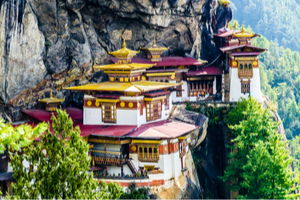 Zigzag through an alpine forest that leads to a moment defining view of the Taksang Tak Monastery perched casually upon the rocky ledges of a steep cliff and looking out at the verdant trees below. 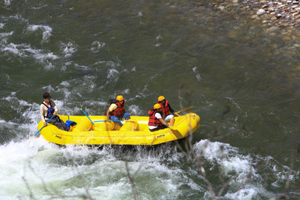 Rise and fall as you paddle and shift your weight to tame the currents of the Paro River, while simultaneously taking a breather to cast an eye over a pastoral backdrop.